Ok, it may not win a beauty competition, but Jabuticaba may well win the prize for being the most unearthly looking tree you will ever see! Its glossy, blackish fruits grow directly from the trunk of the tree in a “cauliflorous” fashion, giving the tree a distinctly alien appearance! 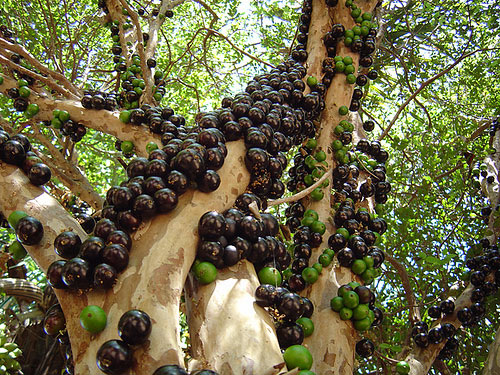 Delicious Flavor
Jabuticaba (Myrciaria cauliflora) is a slow growing tree that is prized for the delicious purple, grape-like fruits it produces. Jabuticaba's deep purple skin covers a sweet translucent white to rosy pink flesh with a sub acid tang. Jabuticaba's striking colour and delicate flavor impart unique qualities to jams, jellies, ice creams and wines. Jabuticaba makes a refreshing juice drink with a flavour that is compared to grape, blackcurrant, lychee, mangosteen and guava! The fruit is also appreciated for its exotic fragrance that has featured in several commercial fragrances. 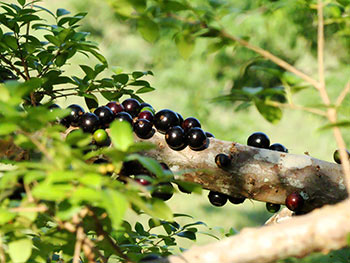 Jabuticaba naturally flowers and fruits only once or twice a year but with regular irrigation, trees will produce fresh fruit year round in tropical regions. Originally native to south eastern Brazil, Jabuticaba is widely adaptable and is now grown commercially in many parts of the world including California and subtropical parts of Australia. Because of its slow growing habit and small size when immature, Jabuticaba is also a popular bonsai plant.

Jabuticaba Research
Several potent antioxidant compounds have been isolated from Jabuticaba fruit, including jaboticabin, a new depside unique to Jabuticaba. Jaboticabin is being studied for anti-aging applications. Jabuticaba is a good source of Vitamin C. 100 g of the fruit contains 57% of the RDI. Jabuticaba peel is also considered a good source of fiber. 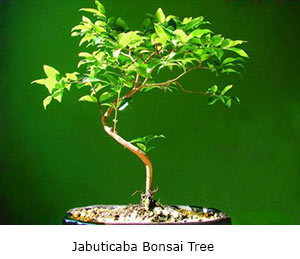 Native to Brazil, Jabuticaba is a popular fruit throughout South America however you are unlikely to find the fresh fruit readily available in North American markets. The reason for this is that the fruit rapidly ferments within 3-4 days of harvesting making them unsuitable for long distance transport. NP Nutra’s new Jabuticaba Juice Powder brings this taste of the Amazon to our shores in a format that is perfectly suited to functional food and drink formulation. Jabuticaba joins our growing range of Amazonian Superfruit treasures including Acai, Aronia, Cupuacu, Borojo, Camu Camu and Lucuma. Give your friendly account manager a call or email today to harvest this booty of the Amazon.