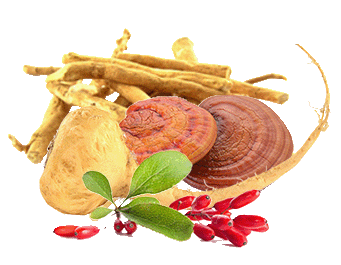 Adapt’n Thrive™ Adaptogen Blend (organic) is a unique combination of botanicals used since ancient times to help protect the body from the effects of stress, promoting balance, rejuvenation and sustained energy.

Amla is also known as Amalaki, Indian gooseberry, and as Dhatri in Sanskrit, which means supporter/sustainer. Used in Ayurveda to balance the doshas (Vata, Pitta, Kapha - the three fundamental energies in the body), amla is a rejuvenator (Rasayana) and has a cooling effect on the body.

Ashwagandha is also known as Indian Winter cherry or Indian ginseng. Its name is a combination of the Sanskrit word ashva (horse), and gandha (smell), meaning it has the smell of a horse, and it’s said that consuming ashwagandha provides the strength and vitality of a horse. In Ayurveda ashwagandha has heating, oily and strengthening effects, and is especially used to balance excess Vata and Kapha.

Astragalus, also known as Milk vetch, is one of the fundamental herbs in Traditional Chinese Medicine. It is considered adaptogenic and strengthening to the whole body, and is said to have the ability to strengthen Wei Qi (Defensive Qi/Energy). With a sweet flavor and warming properties, it is a popular tonic.

Cordyceps, also known as Caterpillar Mushroom, is an exotic mushroom in Tibetan and Traditional Chinese Medicine, where it is considered sweet in taste and neutral in nature, and is used to improve energy, endurance, appetite and sleep quality.

Goji, also known as wolfberry, has been used in Traditional Chinese Medicine for thousands of years. It is considered calming in nature and is recommended for its ability to balance the “yin” and “yang” in the body, promote longevity, mental focus and good health, reduce fatigue, and enhance the body’s ability to adapt to a variety of stimuli.

Lion's mane mushroom, also known as Mountain-Priest mushroom and Bearded Tooth fungus, is considered in Traditional Chinese Medicine to be sweet in taste and neutral in nature and is used as a tonic for the five internal organs.

Maca, also known as Peruvian ginseng, was used by the native Andean people as food and in folk medicine, and the Inca Empire warriors took maca before battle to boost their energy, stamina and general well-being.

Panax ginseng, sometimes called Korean ginseng or Asian ginseng, is considered by Chinese Taoists to be a tonic herb with the strongest ability of any herb to absorb strength from the earth and tonify the Qi, or lifeforce. In Traditional Chinese medicine panax ginseng is considered sweet and slightly warming in nature, and is used to reinforce Qi and calm the spirit.

Reishi, also known as Mushroom of Mortality, has been used in Asia for thousands of years to promote health and longevity. In ancient China, it was said to “absorb earthly vapors and leave a heavenly atmosphere.” In Traditional Chinese medicine reishi is considered bitter in taste, warming in nature, and acts to replenish Qi and ease the mind.

Rhodiola rosea, also known as Golden Root, has long been used in Oriental medicine to help restore Qi and move blood. It was also used to build strength by the ancient Greeks and the Vikings. In Traditional Chinese medicine rhodiola root is considered sweet and bitter tasting, astringent, dry and cooling.

With a savory, earthy and nutty flavor, this powder blend is ideal in:

Adapt’n Thrive™ is a trademark of Nature’s Power Nutraceuticals Corp®.