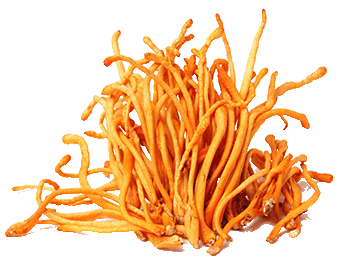 Cordyceps, known as Caterpillar Mushroom and Dong Chong Xia Cao in Chinese, is considered an exotic mushroom in Tibetan and Traditional Chinese Medicine, where it is considered sweet in taste and neutral in nature. Although referred to as a mushroom, it is taxonomically a fungus that is closely related to the mushroom family. Traditionally, and when occurring in nature, cordyceps is a combination of a caterpillar and fungus, but because it is rare and expensive, other natural forms of cordyceps sinensis have been cultured for commercial purposes, and have largely been found to be as effective as wildcrafted cordyceps. Our Cordyceps Mushroom Powder (organic) is made from cultured cordyceps, not wildcrafted. In the cultured process, the fungus growth stops at the mycelium, meaning that the fruiting body does not grow. Our product is an isolated strain from natural cordyceps, used to obtain similar nutrients to the original species.

A rich source of antioxidants, cordyceps’ primary bioactive components are polysaccharides, nucleosides and their related components (especially cordycepin), and D-mannitol (cordycepic acid). It also contains fatty acids, proteins, trace elements and several sterols, including β-sitosterol, and Ergosterol, which is a biological precursor of vitamin D2.*