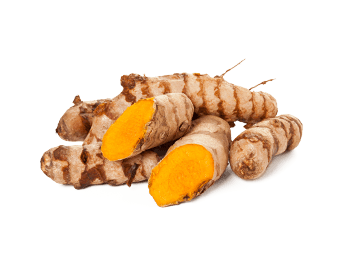 Turmeric (Curcuma longa) is a member of the ginger family and native to Southeast Asia and India. The plant grows up to 3.5 feet tall, has long leaves that narrow at each end, and flowers that arise from the center of the leaves. The orange-yellow colored rhizomes (underground stems) and roots, with their earthy, potent and slightly bitter flavor, are often used in cooking and nutritional applications.

More than two hundred compounds have been identified in turmeric, with most being classified as phenolic compounds and terpenoids. The most significant bioactive compounds in turmeric are fat soluble polyphenolic pigments called curcuminoids, which are responsible for turmeric’s distinctive orange-yellow hue. Curcumin is considered the principal curcuminoid and others include demethoxycurcumin and bisdemethoxycurcumin. Turmeric is also a very good source of iron, potassium, magnesium and zinc, and contains some of the essential fatty acids omega-3 and omega-6, which are not produced by the human body and must be obtained from foods.*