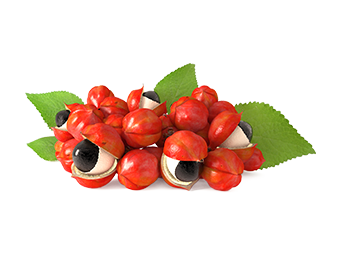 Guarana (Paullinia cupana K.) is a climbing vine native to the Amazon basin and commonly grown and used in Brazil. The red berries, containing seeds that are approximately the size of coffee beans, have been consumed for thousands of years.

Guarana seeds contain as much as 4-8% natural caffeine, which is about twice the concentration of caffeine found in coffee beans. This caffeine is released slowly, sustaining the desired effects. Guarana also contains trace amounts of theobromine and theophylline, as well as large amounts of flavonoids (especially catechin and epicatechin), alkaloids, saponins, terpenes and tannins.*