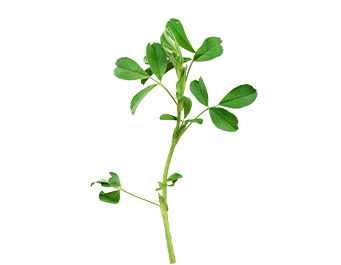 Alfalfa (Medicago sativa), also called lucerne or purple medic, is a perennial herbaceous legume that grows one to three feet tall with bunches of small purple flowers resembling clover. Widely grown for feeding livestock due to its protein and nutrient content, it is also used as a cover crop for improving the nutrient levels in soil.

Nutrient-rich young alfalfa grass contains over 300 identified nutrients and phytonutrients. It is especially high in iron, calcium and vitamin C, and a good source of potassium, manganese, molybdenum, phosphorus and zinc. It is a rich source of the pigment chlorophyll and contains many bioactive compounds like saponins, phytoestrogens, coumarins, alkaloids, phytosterols, terpenes, coumestrol, phenolics, flavonoids and isoflavonoids. Alfalfa is high in provitamin A carotenoids, the majority being xanthophylls like lutein and zeaxanthin. It contains enzymes, including amylase, invertase and pectinase, is low in fat, an excellent source of dietary fiber and a rich source of protein, containing eighteen different amino acids, including eight essential amino acids.*