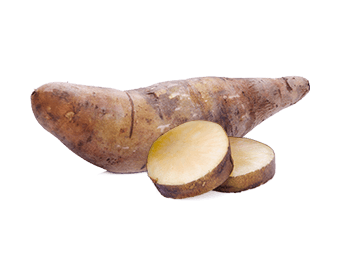 Yacon (Smallanthus sonchifolius), also known as Peruvian ground apple, is a species of daisy that was traditionally grown in the northern and central Andes. The most commonly used part of the plant is the crisp, juicy, sweet-tasting tuberous root. This root has a shape similar to sweet potato, a texture similar to jicama, and an exotic sweet flavor. It can be used in cooking and is popular in syrup or powder form as a sugar alternative.

Yacon root is a rich source of fructooligosaccharides (FOS) and inulin, which are indigestible polysaccharides not absorbed in the body. They are also a good source of potassium, calcium and phosphorus.*