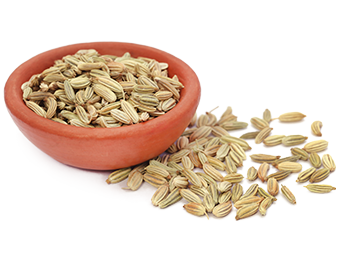 Fennel (Foenicum vulgare) is an upright perennial herb that can grow to 8ft tall. The herb, which commonly grows wild in temperate climates, has delicate yellow flowers and feathery, dill-like leaves. Its seeds and leaves, which taste similar to anise, are often used in cooking.

Fennel seeds contain a unique combination of phytonutrients. Anethole, which gives fennel its anise flavor, is the primary component of its volatile oils, and it also contains smaller amounts of fenchone and limonene. The seeds are a good source of dietary fiber, calcium, iron, potassium, phosphorus, magnesium, zinc, molybdenum, copper, phosphorus, manganese, folate, and vitamin C and B3.*